History of the District

William Schmitt, a Buick dealer, formed the North Greece Fire District. A Pierce-Arrow truck was purchased for $6,700, the first motorized fire truck in the Town of Greece.

In June of 1922, the Blacksmith Shop at the corner of North Greece and Latta Roads became the first firehouse, and William Schmitt, the first chief. During the ’20s the Department responded to many fires and traveled out of the District to assist surrounding Fire Departments.

With the beginning of the ’40s, the District purchased an inhalator and placed it in a squad car to be used or medical emergencies. In 1944, the Ladies Auxiliary was formed.

The ’50s saw rapid growth in the North Greece Fire District. The first radio was placed in truck #5. The truck could communicate with the Rochester Radio Control Center.

In 1955, Fire radio receivers were purchased for all volunteers. As more homes were built in the eastern part of the District, it was determined that a second firehouse was needed.

On July 27, 1958, the new house at Latta Road and Mt. Read Blvd. was dedicated. In September of 1958, two new Seagrave pumpers were placed into service at the new firehouse.

As we moved into the ’60s the District saw an even faster rate of growth. Many family farms along Latta Road disappeared, and tracks of homes sprung up.

On September 15, 1963, the construction of a new communication center and three-bay addition was dedicated at the station at North Greece and Latta Roads. In October 1963, the State installed a traffic light at the corner of Latta Road and Mt. Read Blvd.

The department newsletter, the Alarm, was started in the Fall of 1969 by Patty Williams and Jane Burgess.

As the District continued to grow, the Spring of 1970 saw the ground breaking for the expansion of the Latta Road and Mt. Read Blvd. station. Also, at the same time, Headquarters was moved to that location.

The North Greece Benevolent Association was organized in July 1970. 1972 saw the first ladder truck purchased for the District, a Tele-squirt. Also, the ladder truck was the first to be painted with the new truck color – “chrome yellow.” The Department celebrated its 50th Anniversary in 1972. In December of 1972, the Department announced the creation of the Fire Prevention and Inspection Division; Gene Preston was in charge.

Tragedy struck the Department on October 4, 1975, when firefighter Charles Werner fell from the back seat of a pumper and was killed.

As the size of the District’s population increased and the demand for service continued to grow, in 1981 it was determined that four full-time firefighters would be hired. They worked 6 AM to 6 PM, Monday through Friday. In April of 1983, station #3 was completed on English Road.

The history of the North Greece Fire Department up to 1982 was taken from the book Milestones Along The Way 1922 to 1982, written by Eugene Preston and John Stageman.

1983 also saw the opening of the Training ground at 3666 Latta Road. A three-story cinderblock building was constructed as a smokehouse. In 1986, Thomas Grace was promoted from career firefighter to Lieutenant. He was assigned to direct the career firefighters, dispatchers and administrative staff.

This was the year that the new attack pumpers were purchased, and the apparatus colors were changed to white over red. In 1988 the tele-squirt ladder truck was replaced with a 75-foot quint.

With a concern for the many facets of emergency rescues, in 1991 the District purchased a Heavy Rescue Truck. As the North Greece Fire District continued to grow, a need was seen for 24-hour coverage by career staff.

In 1999 Station #3 was remodeled and the living quarters were enlarged, and it became a 24-7 operation in 2000. With the turning of the century, our 75-foot quint was replaced with a 105-foot truck.

As we look to the future new and innovative technology will be our guide to change. 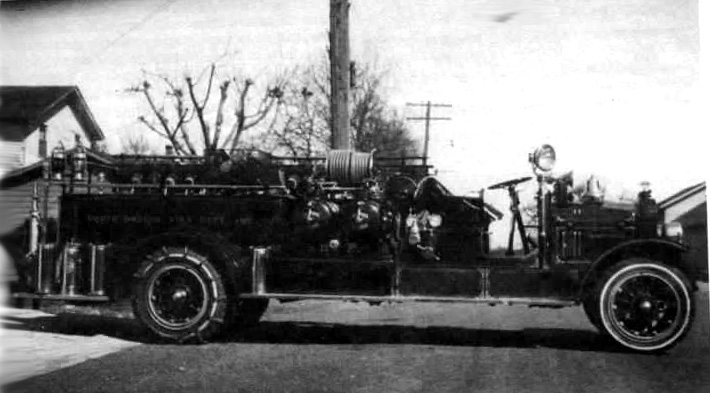